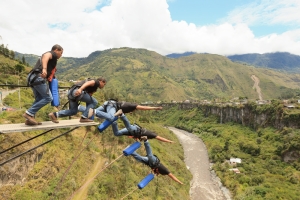 Bungee jumping is an exhilarating experience.

Leaving the platform and falling away from everything safe and secure to trust that the bungees will hold before the ground stops the fall is exciting.

Of course, many back out of the experience before it even begins for the same reason.

Parts of this daredevil exercise can be a metaphor for the Christian life. Why would a person ever want to jump from the safe and secure hands of Christ? Nevertheless, the author of Hebrews describes believers who do just that.

He describes those who leap from what they know to be true, falling into the rocky depths of tradition.

Hebrews 6:5-6 says, Who have tasted the word of God and the powers of the coming age, and who have fallen away, to be brought back to repentance. The phrase “fallen away” is the single Greek word parapipto.

As has been stated earlier, it is this author’s belief that Hebrews was written to former Jewish Priests who had accepted Christ.

Jewish priests lived as the cream of the Hebrew crop.

For them to give up who they were genetically (sons of Levi, dedicated by God Himself for service to Him in His temple), financially (provided for by the tithes and offerings brought into the temple), and socially (held in high esteem by all the people as set apart by God) to live, not only as commoners, but as refugees must have been a kind of persecution in and of itself.

What the author is telling them here is to stop trying to blend Judaism (sacrificial system which must have felt comfortable to them) and Christianity (which they knew to be right and a fulfillment of all those prophecies and promises).

Verse two of chapter six says these people who have fallen away were performing cleansing rites, the laying on of hands, discussing the resurrection of the dead and eternal judgment.

They were not teaching that there were other ways to heaven beyond Christ, just that Old Testament Jewish traditions could still be used in the worship of Christ.

The cleansing rites mentioned are not baptism but a Jewish cleansing ritual that Ezekiel 36:25 says would be replaced with a spiritual one.

The laying on of hands is not the apostolic practice. This stems from the Old Covenant practice of laying one’s hands on the animal before it was sacrificed to symbolize the releasing of sin as seen in Leviticus 1:4, 3:8, and 3:13.

It is not known what was being taught on the resurrection of the dead and eternal judgment. Job explains there will be a bodily resurrection but nothing else is really said about the subject in the Old Testament.

Ecclesiastes 12:14 says, God will bring every act to judgment, everything which is hidden, whether it is good or evil, but not much else is discussed on judgment.

Even though the Bible says little on these concepts, it is well know the priests had written on them in the Mishnah (rabbinical writings) and these philosophies are the ones with which the writer could be taking offense.

Needless to say, teachings that were not leading people to Christ were being offered as part of the theology of Christ. The writer, in verse one of chapter six, considers these to be immature, elementary, and not leading to repentance.

Throughout the book of Hebrews, the writer is speaking to Christian people – those who should know better than to teach these philosophies – yet they have fallen away from the truth.

Just as every person sins, these former priests were swayed from the Truth, chasing after the things which made them feel comfortable.

They were not apostate; they did not rejected Christ. However, they did allow themselves to be misguided and fall away into sin.

By continuing their false teachings, they lost the blessing of God and caused a rift in the church. They surrendered the gift of maturity in Christ, and forfeited the blessings that come from an obedient life, negating effective service for Christ.

The word parapipto means “a willful falling away” and not just drifting away over time. With this attitude of willful disobedience it is impossible to repent.

Only when one is contrite can one truly be forgiven.

This is why the author was writing to the Hebrew people in the first place. He desired them to be returned to good fellowship with God.